June's meeting will add Windows code to the SPEEDTEST.
Most of the code and ideas from the text version will be used. 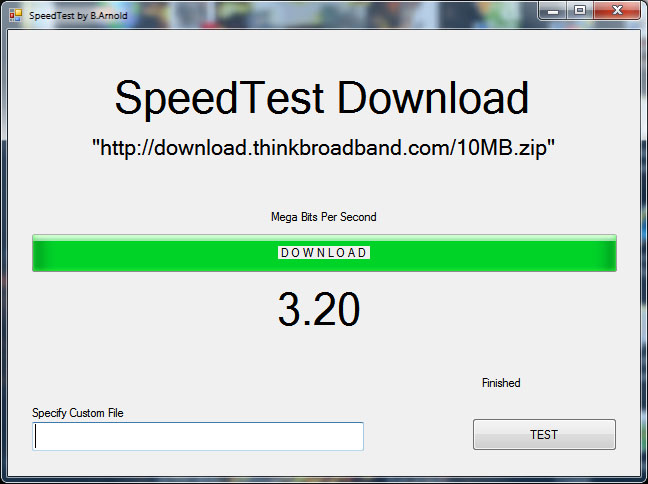 For this month we will continue with the project started last month. This time we will discuss background operation with multiple threads. This takes us into a universe that includes INTERUPTS and SIGNALS from the old days of Microprocessor and Computer Programming. However, this time it will be more modern and will utilize the features of the Microsoft DOT NET run time package that is normally used for Windows programming but which is equally at home in text based programming. The second screen image above shows the results of this new code. As the program runs, you can watch the "Progress in percent" go from 0 to 100 and show the corresponding speed.
Some information about the project follows.

It's a text based .Net program that accesses a data file located somewhere on the Internet!  (It also works on an Intranet or local network but that's not as exciting.) For example, lets say that you know about a particular data file on a Website in Spain. This program will download 1,000,000 bytes from that file and then calculate the download speed in KBytes per Second. The data file for the above Excel chart was created by attaching the program to the Microsoft Scheduler and running the program every 5 minutes. It adds to a data file every time that it runs. See the description in the sample code below for a more detailed introduction.

Again, let me welcome you to the CSIG, a Special Interest Group of the ACGNJ. Members and visitors are encouraged to bring in C++ questions, problems, and even programs to be discussed by the entire group. Most of the programs previously presented used the latest C++ compiler in Microsoft's Visual Studio. The compiler uses a concept called CLI. Here's what Wikipedia says: