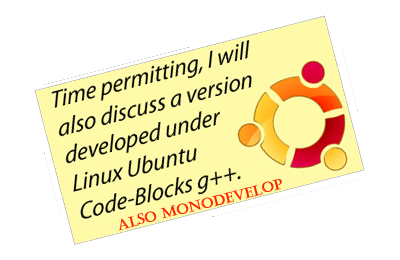 Written by B. Arnold

Since there were a number of people who were still on Summer vacation last month, this is a repeat of the September topic. 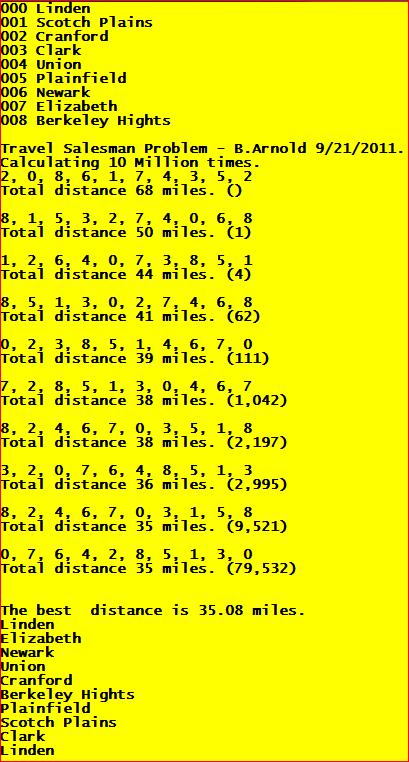 The subject for this month is an extremely simple version of the Travelling Salesman Problem. The program uses a "Command Box" which is similar to a "Dos Box" and does not use any of the Windows Graphic libraries. It is very easy to understand. The code uses the C++ compiler in Microsoft's Visual Studio 2008 and may also be compiled using the free C++ Express compiler. Some of the items that we will discuss are as follows.

The TRAVELLING SALESMAN PROBLEM (TSP) is a classic computer subject. There are probably over 100 web sites devoted to TSP discussions. Here's something from Wikipedia:

The travelling salesman problem (TSP) is an NP-hard problem in combinatorial optimization studied in operations research and theoretical computer science. Given a list of cities and their pairwise distances, the task is to find a shortest possible tour that visits each city exactly once. The problem was first formulated as a mathematical problem in 1930 and is one of the most intensively studied problems in optimization. It is used as a benchmark for many optimization methods. Even though the problem is computationally difficult, a large number of heuristics and exact methods are known, so that some instances with tens of thousands of cities can be solved.

My goal at this meeting is not to discuss 3rd year Computer Science algorithms. The goal is to discuss relative simple text based programming using C++ with OOP or Object Oriented Programming techniques. I choose the TSP because it is easily understood by most people. Here's an example: You want to visit the center of 9 cities and you wish to choose a route that minimizes travel distance. At the right is a screen shot showing the results of the program. This TSP solution is very simple in that it uses a Monte Carlo technique. This algorithm guesses at a solution using random numbers and then finds the best solution. It is only useful for small groups of cities, lets say 20 or so, because after that the number of permutations of possible paths become astronomical. Because it is a text based C++ program, it is quite fast. This implimentation checks 10 million possible solutions in only a few seconds.

The algorithm takes as input a list of town names and their corresponding coordinates in latitude and longitude. But, where do you get the numbers? If you enter a location in Google Maps (maps.google.com) and then right-click on the balloon marker to select "what's here?", Google puts the numbers in the search bar. They can then be pasted into this program. For example: Fanwood, NJ = 40.641638,-74.383407 degrees.

This month we will solve the problem using text mode code. Time permitting, I will also discuss a version developed under Linux Ubuntu Code-Blocks g++. Next month the plan is to graph the results using graphics based Windows code.

Text processing is an area that C++ programs shine above all other languages. The code produced is usually quite compact and ultra fast. Last year I wrote a program for doing text replacement in a data file. The user had to convert extra characters from a Mainframe dump into readable text. The source was a 10 Megabyte text file and the processing took about 1 hour of actual computer time to accomplish the replacement using Notepad. The operation was repeated daily. My program, using normal C++ functions, took about 20 seconds! The user was dumbfounded.