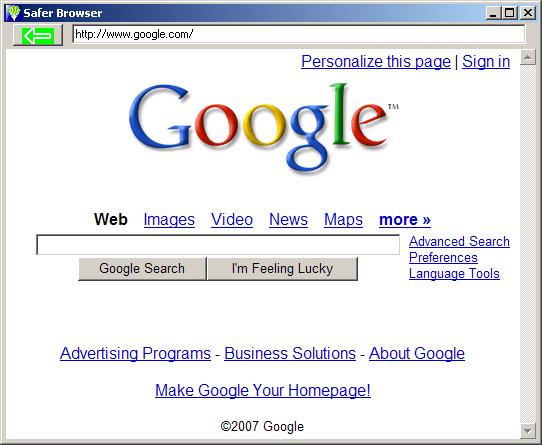 This application program demonstrates the ability of the Visual Studio software to include an Internet browser window inside a standard C++ program. It allows creating a custom browser with special features.

Here are the details ...

This application is designed to partially duplicate the functioning of a standard Internet browser. It may be used whenever diagnostics and/or extra safety is required.

In order to go to a web site, just type the name in the Address bar at the top. A shortcut with that name as an argument may also be used.

Whenever a new address is provided, or the site code tries to jump to another site, a prompt message appears which allows the user to decide whether to proceed or not. The parachute logo represents the fact that you have much more control over your browsing. You will probable find it surprising that familiar web pages are so complicated. Often going to one page launches 5 others in the background without your realization. Tip: for safe web sites, just hit the Space Bar.

Standard Hot Keys are provided:
Ctrl-P for printing,
Ctrl-C for copying,
Ctrl-A for selecting all, and
Ctrl-F for finding.

The programs are normally quite small, about 100 KB, but require a Windows computer that has the following software installed:

This is a large package, about 24 Megs. Most people running updated versions of WinXP will already have it on their computer. If not, it may be downloaded from Microsoft.

Here's what Wikipedia says about CLI:

At the meeting on Tuesday night we will be discussing these items and more.

"Random Access" questions start at 7:30 Tuesday night. See you there.